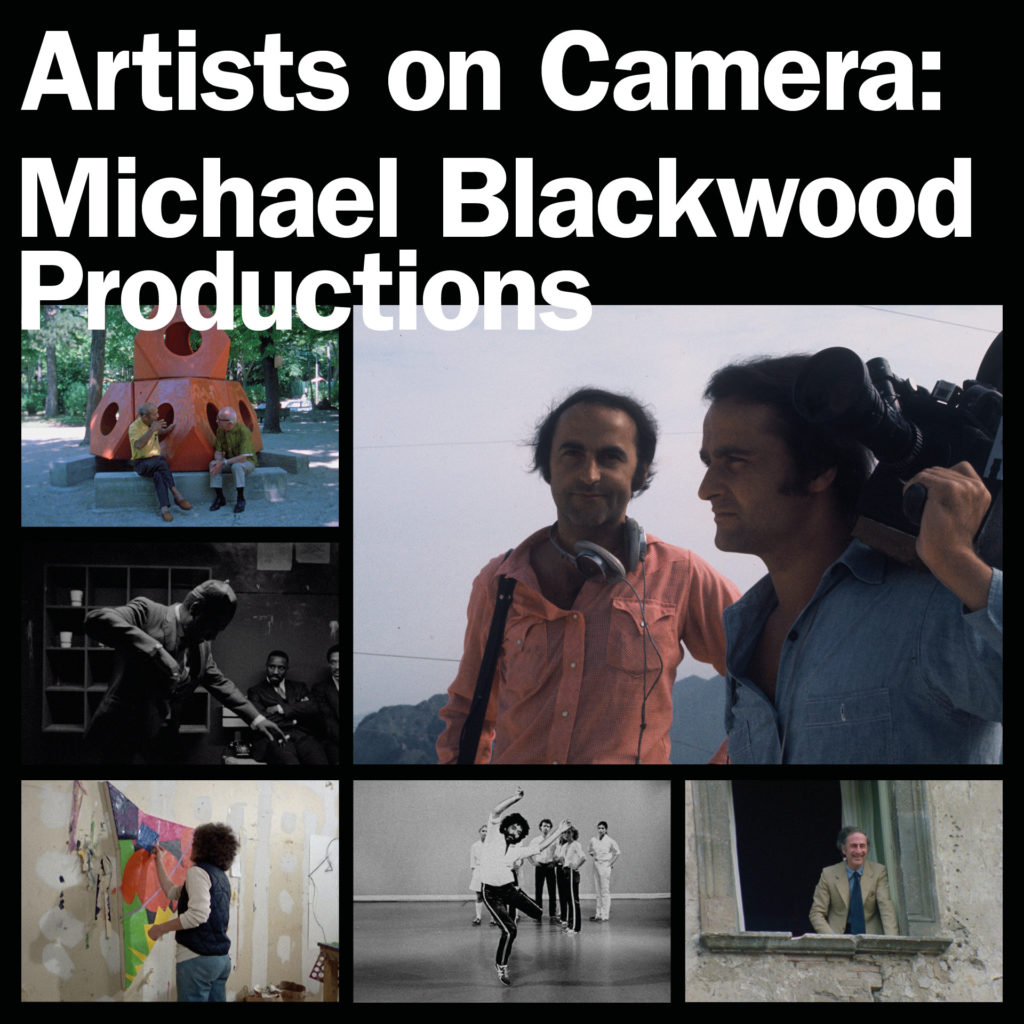 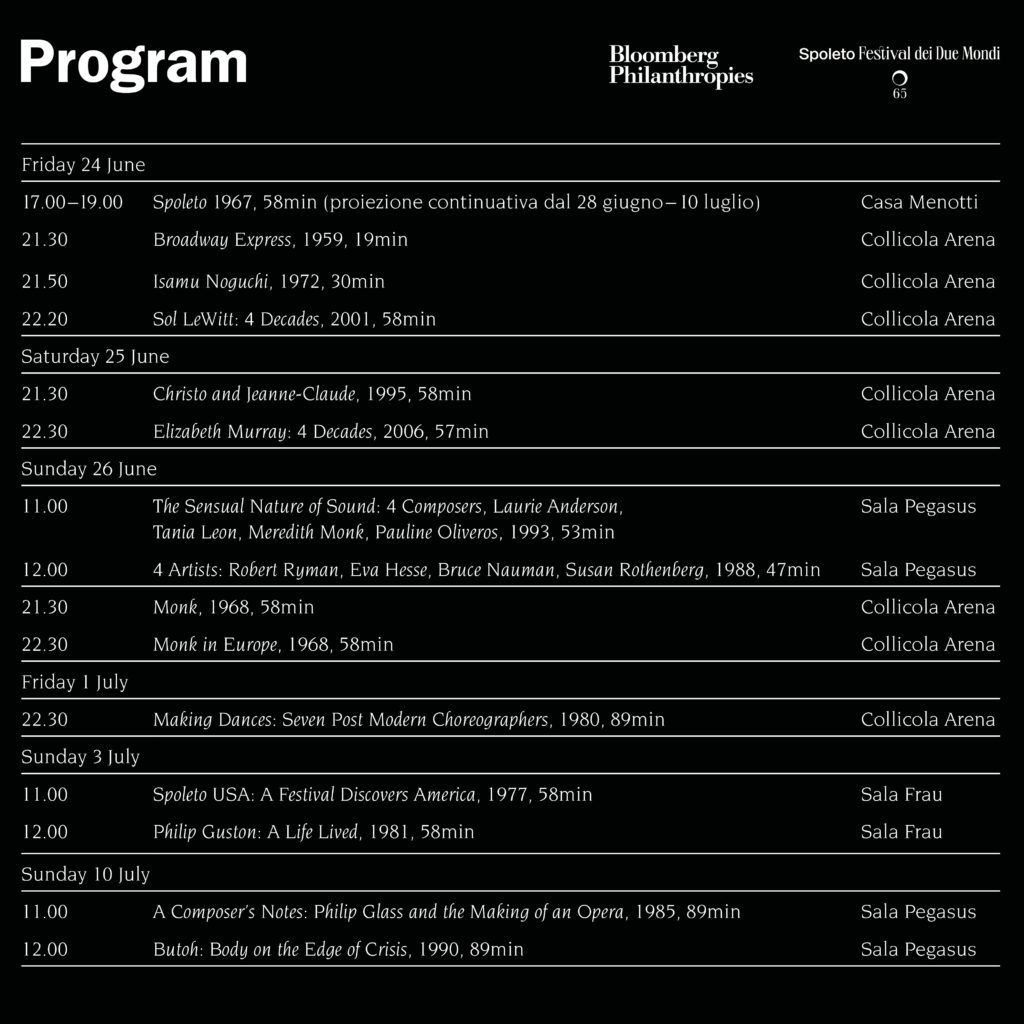 As part of the Festival dei Due Mondi 2022 in Spoleto, Italy, the Mahler & LeWitt Studios is pleased to present ‘Artists on Camera: Michael Blackwood Productions’, supported by Bloomberg Philanthropies. Michael Blackwood is one of the most established and prolific art documentary makers and has produced over 150 films from the 1960s to now, chronicling the stories of the most impactful creative minds of their day. One of Blackwood’s early films, Spoleto 1967, documented the 10th anniversary of the Spoleto Festival (this film will be screened at Casa Menotti, the Festival documentation centre). This is the first review of Michael Blackwood’s work, with a focus on the visual and performing arts; 15 films will be presented across four venues, including Sala Pegasus, a cinema in a 12th century church, and the Collicola Arena, an outdoor cinema screen in the courtyard of the Palazzo Collicola Arti Visive, the modern art gallery of Spoleto.

Please click on the links below for more information about each film and to book tickets on the Festival website. A press release, including trailers and filmstills can be downloaded here. Trailers can also be viewed, along with further information on Michael Blackwood and each film, at www.michaelblackwoodproductions.com.

The ‘Artists on Camera: Michael Blackwood Productions’ film series highlights historic work by a diverse group of artists working in a range of disciplines, bringing their stories to the attention of a new generation of artists and audiences. The series opens with Blackwood’s earliest film Broadway Express, 1959, a portrait of New York through the city’s subway system, shot in the vérité style which he would establish in all his films. We screen Sol LeWitt: 4 Decades, 2001, and Isamu Noguchi, 1972, partly shot in Spoleto with Buckminster Fuller and Ezra Pound. Christo and Jeanne-Claude, 1995, who wrapped several buildings in Spoleto for the 1968 festival, is followed by Elizabeth Murray: 4 Decades, 2006. Two of Blackwood’s important survey films, The Sensual Nature of Sound: 4 Composers, Laurie Anderson, Tania Leon, Meredith Monk, Pauline Oliveros, 1993 and 4 Artists: Robert Ryman, Eva Hesse, Bruce Nauman, Susan Rothenberg, 1988, are followed by the recently remastered Monk and Monk in Europe, both 1968, a two-part portrait of the great jazz composer and pianist. Other films being screened throughout the festival include: Philip Guston: A Life Lived, 1981, Making Dances: Seven Post Modern Choreographers, 1980 (screened during the visit of the Trisha Brown Dance Company to the 2022 Festival), A Composer’s Notes: Philip Glass and the Making of an Opera, 1985, Butoh: Body on the Edge of Crisis, 1990, and Spoleto USA: A Festival Discovers America, 1977, which documents the first US Spoleto Festival, which continues today in Charleston.

www.michaelblackwoodproductions.com Michael Blackwood Productions is an independent production company that has produced over 150 documentaries on the arts and its contributors. The collection features over 1,000 participants or subjects, and spans over six decades of documentation, beginning in the 1960s and including earlier material, through the second decade of the 21st Century. The films serve as primary documents for educational and archival purposes, as well as informative and special interest pieces for the general public. A growing number of educational institutions, libraries, museums and various media outlets are acquiring the films around the world. The collection itself is one of the largest and most significant of its kind.

www.festivaldispoleto.com The Festival dei Due Mondi was founded by the popular opera composer Gian Carlo Menotti in 1958 and was one of the first multi-disciplinary arts festivals of its type. It quickly garnered international recognition for developing and promoting avant-garde art, often in public environments. It takes place in June and July each year and makes use of the plethora of exhibition and performances venues boasted by the town of Spoleto – including the Teatro Romano, two opera houses and the many Piazzas. The newly appointed Director of the Festival is Monique Veaute, formerly of Palazzo Grassi and also director of Roma Europa Festival.