Clicca qui per informazioni in Italiano>> 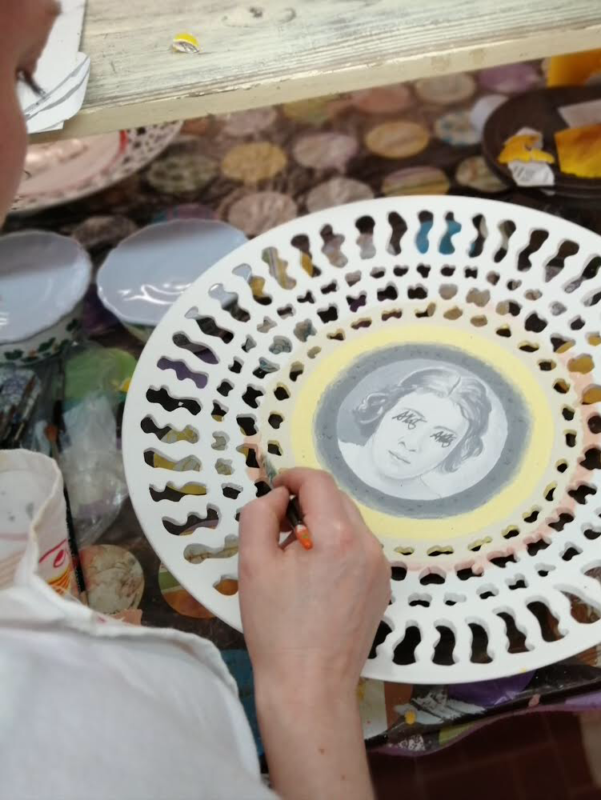 Mahler & LeWitt Studios is pleased to announce an exhibition in the Torre Bonomo of a set of hand-painted ceramic plates by Allison Katz, made in collaboration with La Gioconda in Deruta. The works have been produced as part of a fundraising initiative for the artist residency program and are available for a donation of 1400 euros plus postage (further information below).

At the centre of each plate Katz has made a unique painting using special glazes. The biscuit plates themselves were hand-made by an expert craftsman and every perforation hand-cut before being painted by the artist.

Katz first painted ceramic plates during her Mahler & LeWitt Studios residency in 2017, which led to the solo exhibition Period at Gió Marconi in Milan in September, 2018.

The exhibition manifests Katz’s engagement with the chance results of the kiln and the variegated surface texture of glazes. Inspired by the Italian “traforato” style of the 16th century – the act of making holes in ceramic, woodwork, iron and other materials – Katz has designed a surface that both holds and corrupts the image: Quoting the centre, pausing, connecting elements and separating meaning, the plates are portals that punctuate the language of her wider painting practice.

Purchasing the editions
Please contact info@mahler-lewitt.org for further details. At the end of the Torre Bonomo exhibition we will publish photographs of all the plates via our mailing list and on our website, with details of availability.

We would like to thank the artist for the time and effort she has dedicated to this project. Our thanks also go to Valentina Bonomo for her ongoing partnership, making the Torre Bonomo available for projects, and to the Veschini family at La Gioconda for their scrupulous work and advice. Finally we would like to thank Philip Coulter for his efforts in the production process.

La Gioconda
Since 1963 the La Gioconda factory has been making handcrafted artistic ceramics. It is situated in Deruta, a small town in the heart of Umbria which has a tradition of maiolica dating back to the 13th century. They have produced table set editions with Sol LeWitt since 1984 and have also made limited editions with Alighiero Boetti, Marco Tirelli and Piero Raspi. They have also manufactured vases and decorative plates designed by Tristano di Robilant. Under permission of the French Ministry of Education the company has also reproduced water colours by Raoul Dufy on majolica.

Torre Bonomo
The Torre Bonomo is a medieval tower in the heart of Spoleto which was used by the distinguished gallerist Marilena Bonomo (1928-2014) for residencies and exhibitions from the 1970s to the 1990s and is now an important part of the Mahler & LeWitt Studios program. In the early 1970s, Sol LeWitt was the Torre’s first resident: using it as a studio he made a seminal group of wall drawings on its kitchen walls, which continue to offer a unique insight into his production. Other artists who have exhibited in the Torre include Jannis Kounellis, Nunzio and Richard Tuttle.