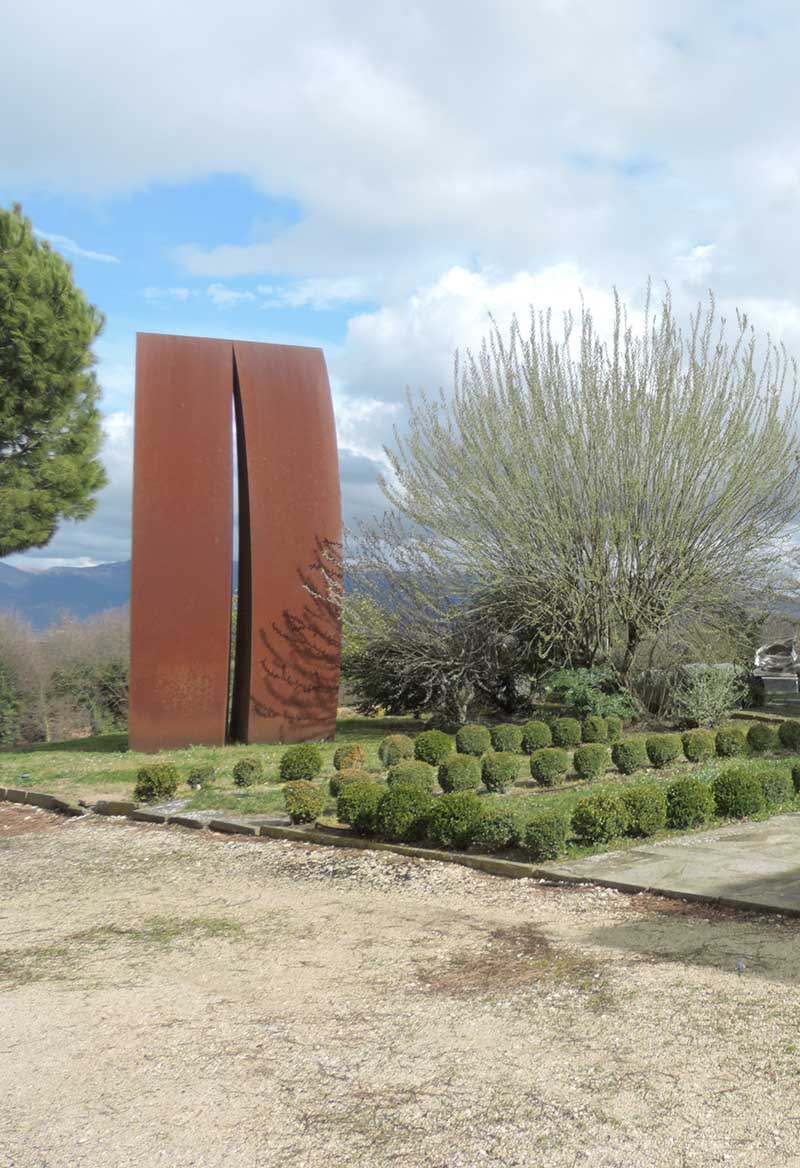 The writers Andrianna Campbell and Annie Godfrey Larmon joined us at the Studios to develop a research project titled Spoleto: if (s)he spoke without 450 corrections. They are now developing a manuscript for a related book that will focus on the work of David Smith and Beverly Pepper. Both artists were featured in the famous ‘Sculture nella Città’ exhibition at the 1962 Festival dei Due Mondi in Spoleto, curated by Giovanni Carandente.

Their first-hand research involved studying a number of archives in the town and they also carried out interviews with Beverly Pepper who still lives and works in Umbria. On this page, Campbell and Godfrey Larmon describe their project in detail and share an excerpt from an interview with Pepper.

Spoleto: if (s)he spoke without 450 corrections by Andrianna Campbell and Annie Godfrey Larmon

Spoleto: if (s)he spoke without 450 corrections is a scholarly research compendium revolving around the 1962 exhibition ‘Sculture nella città’ (Sculpture in the City), curated by Giovanni Carandente as part of Spoleto’s Festival of Two Worlds. Two figures are central to the work: the participating American artists David Smith and Beverly Pepper. Carandente conceived of the pioneering exhibition, that featured over one hundred sculptures by fifty-three sculptors installed throughout the city, as a modernist installation in the medieval-walled town. Smith and Pepper were each invited to spend a month producing work in the factories of Italsider, a semi-national steel company, in Genoa and Piombino and given materials, equipment, and work crews.

During this time, the artists became friends and interlocutors, and indeed, supporters of each other’s work.

Though Sarah Hamill and other scholars have explored Smith’s contributions to the 1962 exhibition, no one has examined Caradente’s extensive archive and focused solely on his prodigious output for the festival. Invited by the Italian government to make two sculptures, Smith eventually made twenty-seven sculptures in thirty days, a harried experience that was nevertheless central to his later production. Meanwhile, Pepper — working for the first time in steel, and for the first time in a factory setting — produced twenty-three sculptures, of which she exhibited only the three largest examples. This, Pepper’s second ever exhibition of sculpture, became definitive of her work throughout her career. Rosalind Krauss touched on this period in Pepper’s career in a monograph produced in 1973, but the artist, arguably the first to use CorTen steel, has been under-represented in recent decades.

These essays — through two treatments and with overlapping principal characters — reconsider a potent period of production in the careers of both Smith and Pepper, as well as each artist’s engagement with the city of Spoleto and the steel factories in which they worked.

The book’s title Spoleto: if (s)he spoke without 450 corrections is taken from an exchange between Allen Ginsberg and Lawrence Ferlinghetti, which the latter read at the festival. Our study is not interdisciplinary, but the title elucidates what we hope to accomplish in the text, which is a re-focusing of the history of sculpture and modernism on to female protagonists.

Central to our study are the archives of Carandente, which are held at the Palazzo Collicola Arti Visive in Spoleto, Pepper’s archive housed in the Frederik Meijer Gardens and Sculpture Park, as well as extensive interviews with Pepper, who, now ninety-four, lives and works in Todi, Italy, close to Spoleto. Our interviews covered a large range of subjects including Pepper’s own work and her thoughts on sculpture, painting and drawing.

We discussed the 1960s, Spoleto and her relationship with other artists and their practice, David Smith amongst others. For this article, we have chosen an excerpt in which Pepper expresses her feelings on the processes of making art, its challenges and rewards. It feels particularly relevant in the context of the Mahler & LeWitt Studios residency program and the creativity which that seeks to inspire amongst early career artists. 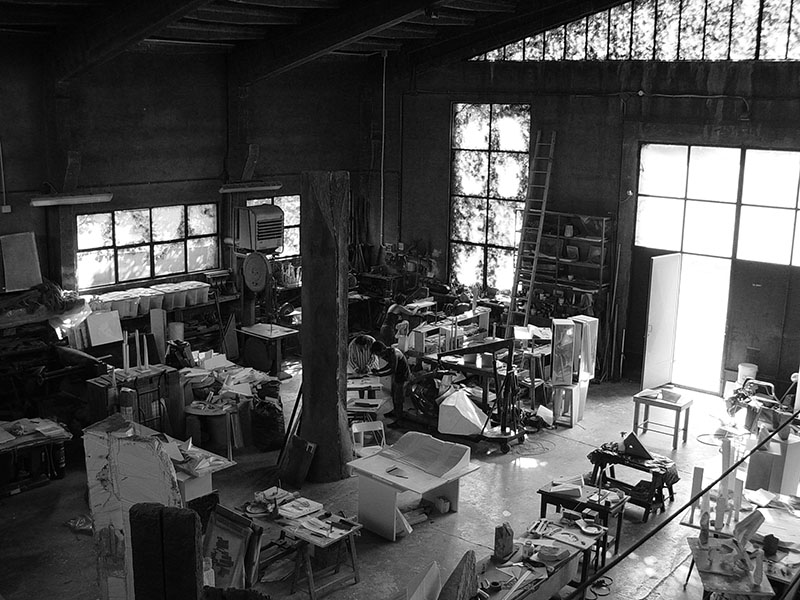 An excerpt from an interview with Beverly Pepper, held in July 2017 at her studio in Todi, Umbria.

Beverly Pepper: You learn more by making mistakes than you do by getting ahead. I don’t know if you agree, but I think the mistakes point out what you shouldn’t do. Sometimes you go on making the same mistake for a very long time before you wake up and discover you’re on the wrong train.

I never knew that I would have that answer. It never occurred to me. But you know, we don’t really know ourselves until we’re asked questions and then you have to dig deep to find out who you are. I don’t think you should always know who you are. I think one of the things about being an artist is that you’re always looking: whether you’re looking for yourself, or for something else.

It’s very hard to know who you are as an artist because part of being an artist is being able to take your mistakes — or rather your change in judgment — and go forth. It’s important, particularly early in your career, that you’re not wedded to something you’ve already done. That’s the worst thing that a young artist can do. I’m a creative artist and I can’t have the luxury of saying today is that, tomorrow is that, and the day after tomorrow is this: I think each thing should have the memory of the one just before it and that one mustn’t dissect one’s work until you’re as close to finishing it as possible. There are so many roads to everything. It would be very confusing if you always say, “I have a choice between this and this”. You don’t have a choice: you are either this or that. But don’t get the idea that I or anybody else thinks all this out — this kind of dialect comes after you’ve made work, not before. You’re not talking to yourself because you want a road map. You’re talking to yourself because you want to have a credible in-built shit-kicker. You’re not credible if you’re accepting everything.

If you are working on something — and I’ve had this happen not infrequently —and you look and you look and something is bothering you, you take it to bed with you and come back the next day and try it again. The trick then is not to be wedded to what you were doing before, because it looked quite good: you have to also be committed to change. And that’s the hardest thing. I know early in my career I would do something that looked terrific and I would keep going and going until it was finished and by the time it was finished the soul was gone, because I knew everything I was doing and I’d kept going and going. I am a very strong believer in the unconscious. I think you can learn more from your unconscious than practically anything and it takes you on a voyage that you don’t even plan so you have new experiences. I try not to ask myself too many questions because, if you have all the answers before you make the work, there is no place to go.

But you learn this, all this, as you get older. Now, you know, I’m an old lady. But with great good luck I don’t feel like an old lady, I just know the dates. There is so much self-discipline in being an artist, but most people have this fantasy about an artist floating and doing what they want. If you don’t have major self-discipline you cannot make good art. You have to know, when you’re looking at something, “that just doesn’t go”, just because it looks pretty. It just doesn’t go, so its got to go — and I’ve been working on it three weeks to get to that point! But you have to be brave to throw it away. And you don’t even have to know. It has to be part of your DNA. It’s very interesting.

Andrianna Campbell is a doctoral candidate in the Department of Art History at the CUNY Graduate Center, where she specializes in art in the modern and contemporary period. Campbell is a co-founder of the peer- reviewed print journal Apricota and a regular contributor to Artforum. She is a recipient of the Andrew W. Mellon Fellowship at the Dia Art Foundation, the Dissertation Writing Fellowship at the New York Public Library and the National Gallery’s CASVA Chester Dale Fellowship from 2016-2017 among others. www.andriannacampbell.com

Annie Godfrey Larmon is a writer and editor based in New York. A recipient of a 2016 Creative Capital | Warhol Foundation Art Writers Grant, she is a regular contributor to Artforum and her writing has also appeared in Frieze as well as many other publications. She is the editor of publications for the inaugural Okayama Art Summit and the former international reviews editor of Artforum. The co-author, with Ken Okiishi and Alise Upitis, of The Very Quick of the Word (Sternberg Press, 2014), she has penned catalogue essays on the work of Okiishi, Alex Da Corte, Loretta Fahrenholz, and Cally Spooner, among others. www.anniegodfreylarmon.com