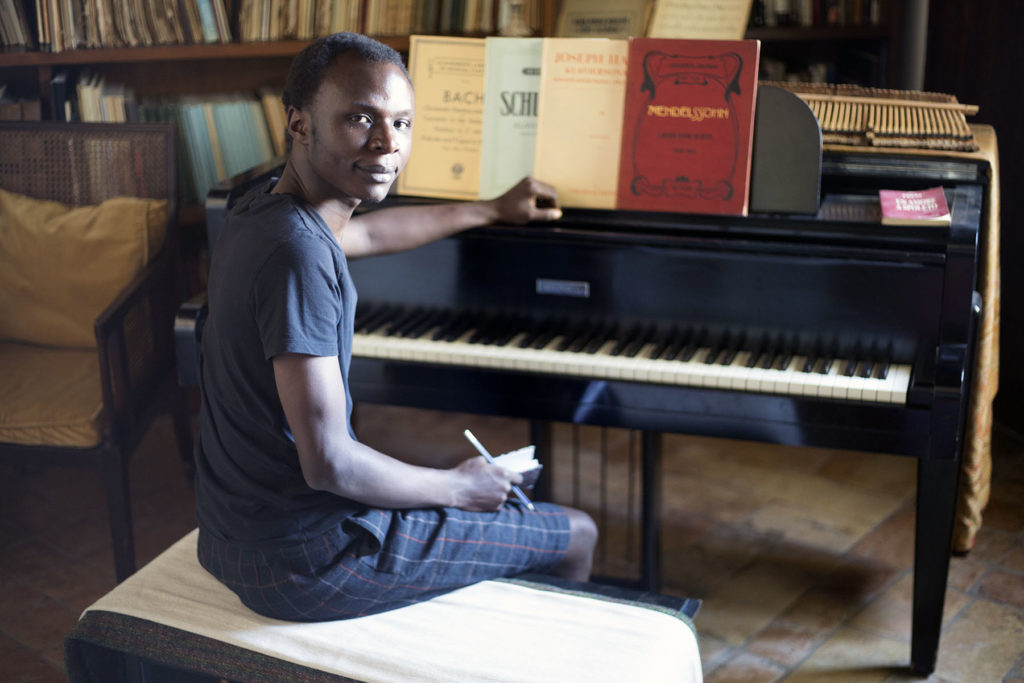 Brian O. Kepher (born 1994) is a conductor and composer living and studying in Nairobi, Kenya. His work facilitates the preservation and appreciation of African music and he is currently focussing on orchestrating native African folk tunes.

During his residency he worked from the music room in Casa Mahler. He completed final amendments to his orchestrated variation of Malaika and started new work, inspired by the sculptures of Anna Mahler. Our former composer in residence, Dr. James Cave, came to Spoleto for three days at the end of the session to work with Kepher. A conversation between Kepher and Cave is reproduced below alongside a text Kepher wrote about his residency.

As his contribution to an ‘Open Studios’ event, Kepher gave a talk about classical music in Africa. He spoke about his own work as well as the music of Samuel Coleridge-Taylor, a composer and conductor of mixed race from England and a contemporary of Mahler, and Florence Beatrice Price, the first African American woman to be recognised as a symphonic composer.

Honestly, this was the first residency of my career as a musician and composer. When I was invited to Spoleto to continue my orchestral compositions, I didn’t know what to expect. I had never been to Italy, but I had known of the land since my early childhood, through the Church and history books.

In 2015, I had conducted a performance for Pope Francis, during his state visit to Africa. So it was incredible that my first excursion with the other residents was to Assisi: a visit to the great basilica which houses the tomb of St. Francis of Assisi. When I saw the mighty works by the great quattrocento artists on the walls of the basilica, a kind of deep understanding came to me of how life might have been then, and how the world has developed since.

The art I came across in Spoleto was also astonishing. It profoundly affected my thoughts and imagination on art, music, religion and politics.

I was humbled to be able to work in Casa Mahler’s music library during my residency. I had books to read and scores to analyse but most important of all was the piano. As a Mahler admirer, I was thrilled to have access to a facsimile of Gustav Mahler’s handwritten Resurrection score. Working with this score proved very important to me. It prompted questions. How does one come up with such a work of genius? Where did he start? What was happening to him then, and to the world? In the facsimile one can see all his earlier markings and corrections, which now appear, finalised, on the concert prints. It also contained revealing letters which Mahler wrote to his friends, as well as to his wife Alma. Throughout my residency I felt like I was finding meaningful connections with an incredibly rich history.

I was surprised and pleased to find myself beginning a new score during my residency. I had not intended to do so. It was inspired by spending time with Anna Mahler’s sculptures and the work of Sol LeWitt.

In Spoleto I really experienced many things which in Korogocho, my home in Nairobi, I do not have the opportunity for. I had a quiet reading space and the piano was readily available. If I needed it while writing for a section, I would play it and imagine how it would feel for the performer. I listened to CDs on the hi-fi and studied a variety of scores in the library, to name a few examples; Schoenberg, Stravinsky, Shostakovich, Wagner, Alma Mahler and Gustav Mahler.

What I have learnt in life so far, is how we can learn from life: how the silence of contemplation and self-reflection, as you look to make a difference in yourself, can reflect usefully out onto the world—if not today, then tomorrow. I think that is what the Mahler & LeWitt Studio residency program is all about. The frightening part is when you have an idea for the music you are composing, but it doesn’t work for you. You can’t sleep because your mind won’t settle. My thanks go to Guy Robertson, our curator and the co-director of the program, who listened to me and offered guidance at such times. He also linked me with composers in Spoleto and arranged for a previous Mahler & LeWitt Studios composer in residence, James Cave, to fly from the UK to workshop my scores with me for three days. James and I shared a great deal and I am most grateful for his time and wisdom.

I will treasure these experiences and memories and I am sure the program will benefit other young composers in the future.

Finally, I also remember fondly the Spoletini who made us feel so at home and kept our hearts warm whenever we gathered. Thanks to the Mahler & LeWitt Studios team for making this time possible.

A CONVERSATION BETWEEN JAMES CAVE AND BRIAN O. KEPHER

James Cave: Can you tell me something about your journey to becoming a Mahler & LeWitt Composer-in-Residence? How did you find out about the program?

Brian O. Kepher: After my application to the Mahler Competition 2016 in Bamburg, I was invited to follow the competition as a guest conductor. This is when I first met Marina Mahler, who was a member of the jury. She was interested in my ambitions with music and asked me to keep in touch. At that time, with the spirit of Gustav Mahler’s composition in my mind, I was orchestrating Christopher Walters’ Malaika Variation, which is itself an adaptation of Fadhili Williams’ 1959 record Malaika. Part of my orchestration was performed by the Nairobi Orchestra in June 2018. Later, I attended the 2018 autumn academic semester on Orchestral Conducting under the guidance of Professor Laurent Gay at the Haute école de musique Genève- Neuchâtel, Switzerland where I met Marina Mahler again. She put me in contact with Guy Robertson, the curator of the Mahler & LeWitt Studios. This led to my being invited to be a composer in residence in Spoleto.

JC: When I did my residency in 2016, I worked on a specific project, Returns. Can you tell me about the project that has been the focus of your residency, what are the main ideas behind it?

BK: First of all I worked on feedback I had received from members of the Nairobi Orchestra regarding my Malaika Variation orchestration. I had to make corrections whilst increasing the complexity of this great African work, adding the chorus by David Zalo. Later in my residency, on seeing a sculpture by Anna Mahler which shows a young lady hiding her face, I was deeply touched—it reminded me of the many children around the globe who face injustice and are never defended. I started developing a new composition about the journey of such a child and the sorrow through which they had come. Because of the affection that Mahler had for nature, he believed that no matter how hard life becomes, there could be a resurgence of a new, heroic mankind. The second part of my new work is how the grown up child fights for justice, despite her knowing that she will lose in the male- dominated world that dictates her story and song.

JC: It was a great pleasure for me to spend several days with you focusing on some of your scores. It seems to me that you have a real flair for large-scale orchestration, in a Mahlerian vein. Do you feel that your approach to writing for orchestra has been more informed by your work as a conductor, or by your admiration of Romantic composers such as Mahler?

BK: At the moment I am trying to relearn how to write for a chamber orchestra. The first composer that I came in contact with was Beethoven (Symphony No. 5 and the chorus symphony). Then I fell in love with the Requiem in D minor by Mozart, whilst Hector Berlioz’s Symphony Fantastique also blew my mind. But when I found Gustav Mahler, I felt I had found my messiah of music. I loved his drama. I have been inspired by the life stories of all these composers; the suffering that they all passed through (well, except for Mozart perhaps) and how they turned their pain into great music. They give me hope and I hope to do the same for others with my music.

BK: Having grown up in the Korogocho slum in Nairobi, I consider myself very fortunate to have found classical music. I think more opportunities have to be open to my people, in terms of training and inspiring young composers and musicians. Mahler’s music is a great way to do this and I am interested in how African classical idioms can be developed in broad conversation with the history of classical music. My wish is that, in the near future, the Nairobi Orchestra programme will include work by African composers, who can write like the great composers that are currently always on the program. I am starting to work on a number of initiatives and with various organisations to develop new schemes and structures to promote these ambitions. 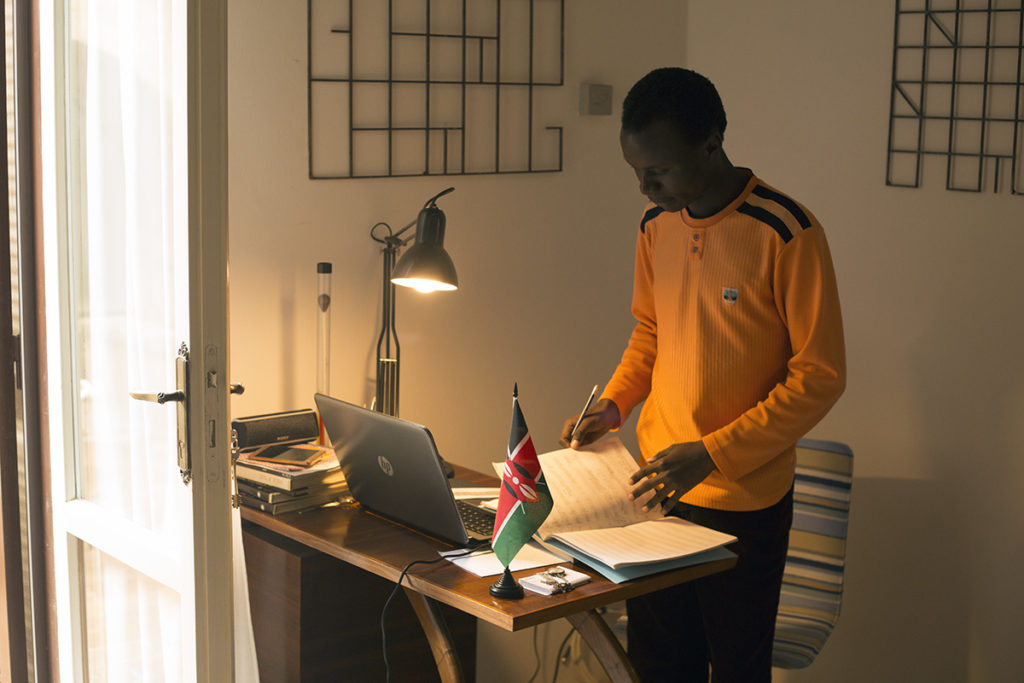 Kepher’s orchestration drawn from Christopher Walters’ Variations on Malaika, a popular song recorded in 1959 by Fadhili Williams, was performed in 2018 by the Nairobi Orchestra.

He also works with El Sistema Kenya, amongst other community programmes, using music as a tool for social change: His involvement with different charities and leadership projects saw him recommended as an Associate Fellow of the Royal Commonwealth Society.

In 2016 he was invited as a guest conductor at the 5th International Gustav Mahler Conducting Competition (Bamberg, Germany) where he took masterclasses with Jonathan Nott. Brian later participated in a residency with Jorge Viladoms at the Lausanne Conservatory in Switzerland and attended the Verbier Festival where he had a masterclass with Iván Fischer. In 2017, he attended the All African Universities Leadership Exchange Programme hosted by the University of North Carolina at Chapel Hill USA, where he met and rehearsed the school’s Symphony Orchestra under the guidance of Prof. Kalam Tonu. In 2018 saw him win a scholarship to attend an academic semester in conducting and orchestration at the Haute école de musique Genève-Neuchâtel (Geneva University of Music) as a guest student under Prof. Laurent Gay.

Kepher was first introduced to music by the church, listening and singing the Gregorian Chants as he grew up. He enrolled at Kenyatta University where he studied music and later grew interested in orchestral conducting, inspired by Gustavo Dudamel and Sir Simon Rattle. In 2015 he conducted a performance which was attended by both the President of the Republic of Kenya and Pope Francis, during his Papal State visit to Africa.

His interest in performance was inspired by hearing the drums of the Kenya Defence Forces when they played the National Anthem of Kenya in 2010. When Brian joined the Ghetto Classics community programme in Korogocho around that time, he became a timpanist and percussionist and has since performed with the Nairobi Orchestra, National Youth Orchestra of Kenya, the Kenya Conservatoire Symphony Orchestra, the SCOKENDIA Ensemble (UK), the Dar Choral Society and Orchestra (Tanzania), Seoul International Community Orchestra (South Korea), and the World Civic Orchestra (USA).