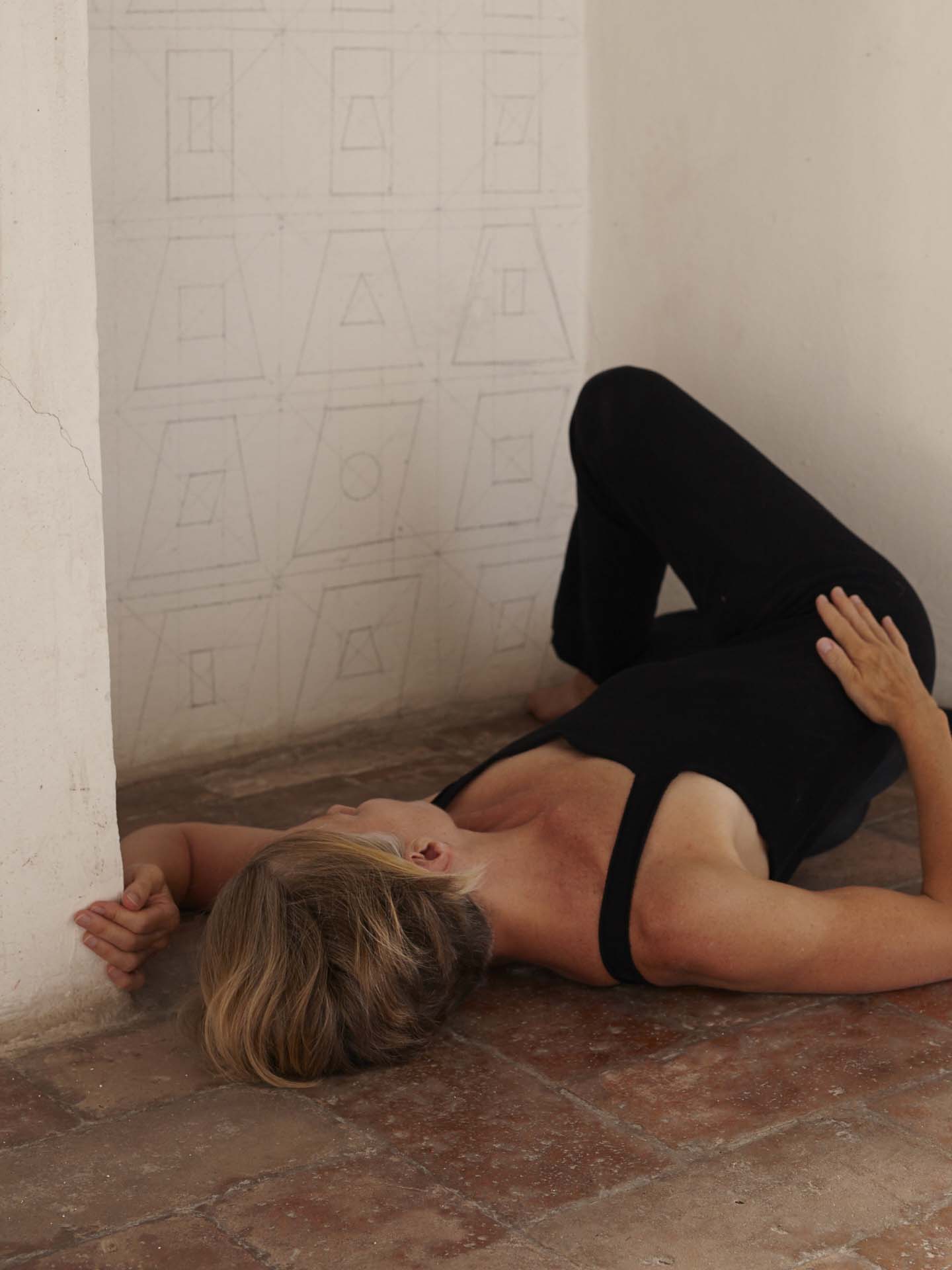 Diane Madden, Associate Artistic Director of the Trisha Brown Company, was our inaugural choreographer in residence at the Mahler & LeWitt Studios. In 2017 she joined us so that she could spend time exploring her own choreography and also to help us consider opportunities for developing choreographic and movement practices in our program. During her initial residency Diane organized a series of movement workshops and invited the residents to participate. Her notes further down this page reflect on the workshops as well as on a photoshoot with Tim Smyth who took the accompanying portraits.

Diane returned to Spoleto to lead the first ever European Trisha Brown Dance Company workshop intensive. After leading the ‘Spoleto Intensive’, she remained in Spoleto to develop her own choreographic work. Specifically, she collaborated with film-maker Matthew Burdis to create a new work in the Torre Bonomo, called Take 3. Diane and Matthew met whilst both were in residence at the Mahler & LeWitt Studios in 2017.

NOTES ON A WORKSHOP
by Diane Madden

What do two visual artists, two curators, a writer, a dancer, a filmmaker and a chef have in common? Gravity.

No escape. At least not while in Spoleto, Italy, the summer of 2017. Gravity is a great unifier and it’s no surprise this would be my modus operandi when planning a movement workshop with a varied group of bodies. It has been my subject matter since discovering improvisational dance practices forty years ago. Recognizing and refining my use of gravity has been the constant through all of my dancing.

Weighted-ness includes everything from heavy to light. It can be applied from falling through to flying and, because it is ongoing, it provides a way to movement, as well as stillness. Using Steve Paxton’s ‘direction of down’ as a tool for sensing gravity, we walked, ran, explored counter-thrust and counter-balance, jointed-ness, crumbling, stacking, etcetera. We used gravity as a lens into the rich inner movement of stillness. Participants were all combinations of brave, playful, careful, and inquisitive.

My aim was to provide a container that allowed participants to have an experience, some aspect of which could be brought into their individual creative practice and life.

NOTES ON MOVING FOR THE CAMERA
by Diane Madden

Within the well-crafted container of the Mahler & LeWitt Studios program, I was given the opportunity to collaborate with photographer Tim Smyth. The assignment was a portrait. When I told Guy that portraits make me uncomfortable, he said it could be a ‘portrait’; abstractly capturing something about me in the time and space of Spoleto.

The process started with choosing a location. I slept on it and woke up with two: the stage-like space at the top of the steps leading up to the rich façade of Basilica San Pietro, and the room of Sol LeWitt drawings in the Torre Bonomo. Looking back I see that the first location is primarily about time and the second about space.

After a morning listening to gorgeous music in an intimate venue of the Festival di Spoleto, Guy introduced me to Tim. I shared my ideas then we visited both sites and made a plan to shoot in the Torre that afternoon and by San Pietro at sunset. I loved the speed of our process and would’ve chosen to do it that way even if I wasn’t departing early the next morning. In the afternoon I threw together a couple costumes before heading over to the Torre with Tim.

In my one previous visit to LeWitt’s rooms in the Torre I recognized they provided an extraordinary introduction to his work and promised myself I’d go back to really dwell in the space. This was my chance. The immediacy, humor and corporeality of the drawings were an invitation to both Tim and me. We moved into the space, eyes eating it up, and a give-and-take of ideas ensued. Taking my cue from the drawings, I responded to the architecture of the rooms with my body’s weight and line. Tim’s adept eye took in untold details and he gave me both specific and overall direction. To get the right perspective Tim had to puzzle-piece his camera and long limbs into the small rooms.

So there we were, wedged into opposite corners of the space, sweating in the Spoleto heat. Both of us in a mode of dynamic stillness, Tim’s breathing became evident and I commented on its mindful rhythm. My impression was accurate and he told me how he was aware of the relationship between the timing of a shutter click and his breath. The rhythm of his breathing had a distinctive pulse that supported our process.

On the Mahler & Lewitt Studios calendar for that evening was an Open Studios and barbeque. Tim and I had estimated the time at which we’d need to leave the festivities in order to hit the right light at San Pietro. We kept checking in throughout the evening, wanting to linger as long as possible. Finally the sun was low enough and, carrying a minimal amount of equipment, we dashed through town, across the highway and up the steps, planning our approach to the shoot on the way. We arrived at the church at just the right moment. The sun was above the horizon and perfectly aligned with the façade like a golden spotlight.

I was very familiar with the view of this site from the terrace outside my room in Casa Mahler. At this same time, most evenings, I would be found on the terrace relishing the view as the swallows swooped, the setting sun glinting off their bellies. The changing light and utter calm of these moments gave me a sense of profound timelessness. At first I had considered the terrace as a portrait site, but then decided on San Pietro, for both its visual and historical richness. The site changed but the specific timing and light remained.

That we were not the first Mahler & Lewitt Studios residents to use the San Pietro site to frame their work — in 2016 James Capper placed one of his sculptures in front of the façade and it was filmed by Matthew Burdis — encouraged Tim and I to use the space differently. Instead of trying to fill the wider space in front of the church, we moved closer to the detail of the façade and its beautiful jade door. I was now situated on the steps and my play with falling benefitted greatly from the precarious placement. This time around there was little conversation but more movement and speed. 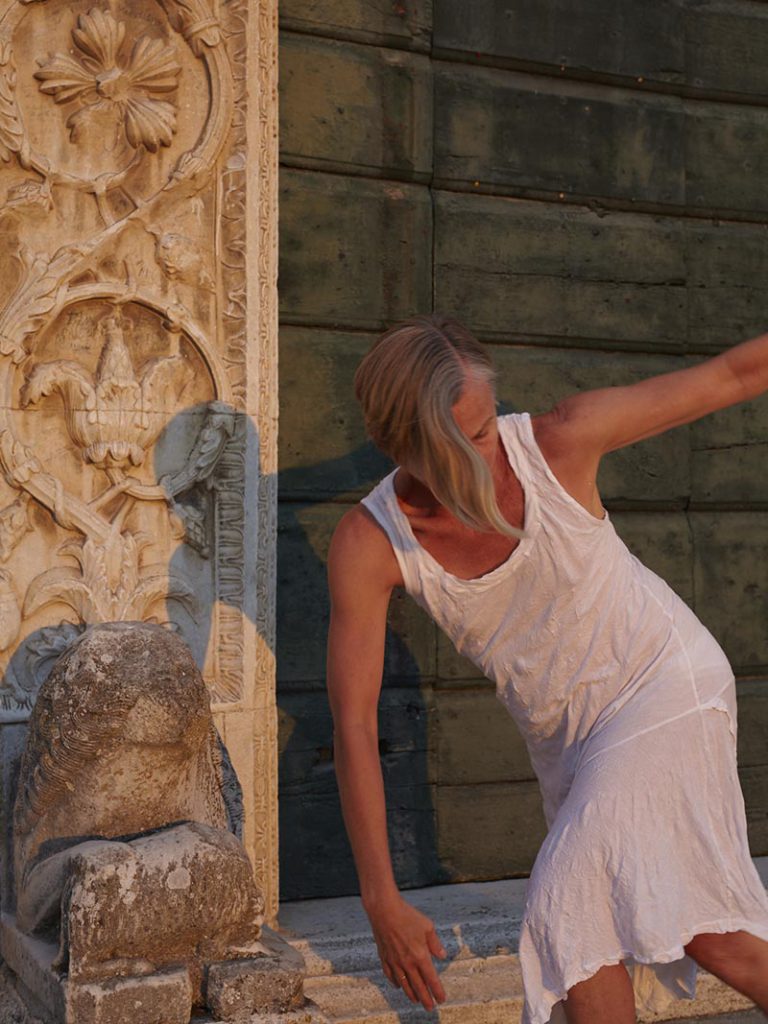 Diane Madden is a performer, choreographer, director and teacher based in NYC. Currently Associate Artistic Director of the Trisha Brown Company, she has contributed to the creation and performance of Trisha Brown’s work since 1980. She performs, teaches and lectures with the company and curates the work for site-specific programs. She’s presented her own solo and collaborative choreography at home and abroad and has enjoyed working with choreographers Jerome Bel, Polly Motley, Lance Gries, Vicky Shick, Juliette Mapp and Cathy Weis. Madden has developed an approach to teaching dance that weaves anatomically grounded technique with improvisation, composition and performance skills. Her worldwide students range from dance artist professionals, through college students to artists from other disciplines including actors, singers, visual artists and composers. Since 2006, Madden has been greatly influenced by her study and practice of Aikido with Fuminori Onuma. The Princess Grace Foundation has recognized Madden with two awards, in 1986 and again in 1994 for sustained achievement. She also received a New York Dance and Performance Award (Bessie) in 1989. In 2012 NYC’s Movement Research honored her, along with the original cast, for Brown’s Set and Reset (1983) collaboration with Rauschenberg and Laurie Anderson.