Artist in Residence, supported by the Inlaks Foundation 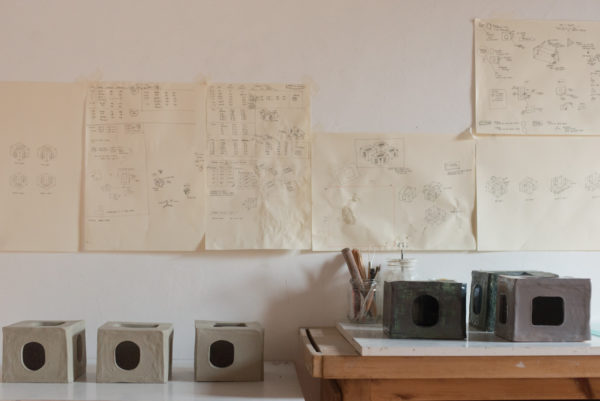 Neeraja D lives and works in Bengaluru, India. Her residency was generously supported by the INLAKS Foundation and her time in Spoleto was extraordinarily productive: she began by making drawings, one a day, of a ball of yarn. A way, perhaps, to ease the anxiety of an empty studio. She also worked on a series of photograms: ghostly figurings of geometric forms, suspended in a deep-blue space. However, drawn to the kiln, she started to work on a series of ceramic locks referencing those found on each corner of a shipping container. These locks allow the containers to be attached to one another, to a boat, a train, a truck: the lock facilitates homogeneous transportation in our global network. The text which follows accompanied an exhibition of the locks which she presented in a deconsecrated roadside chapel called Madonna del Pozzo. 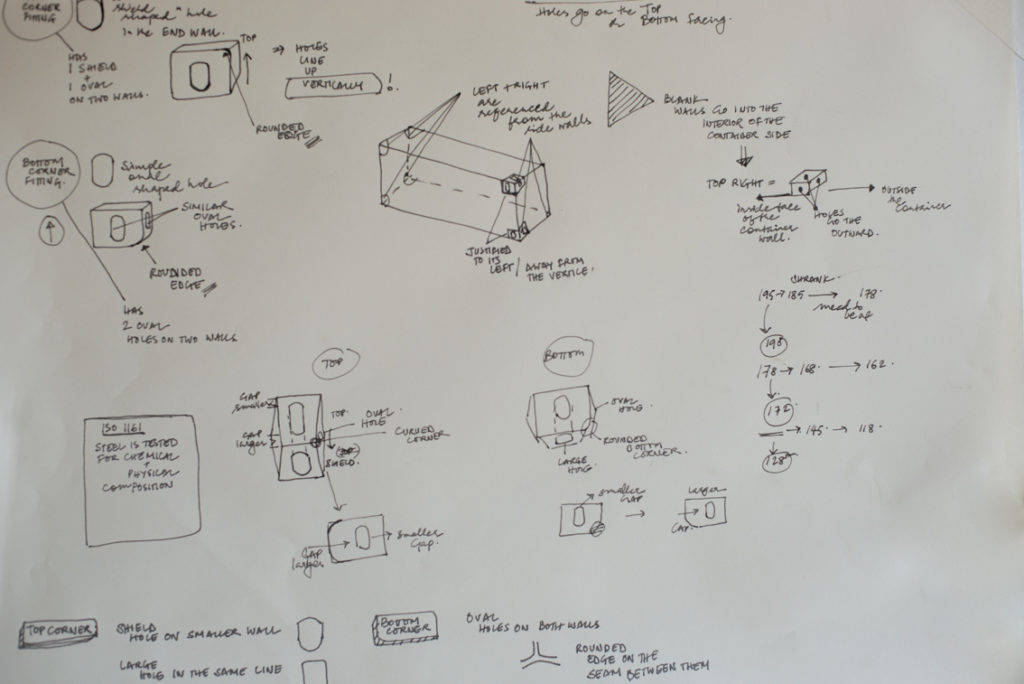 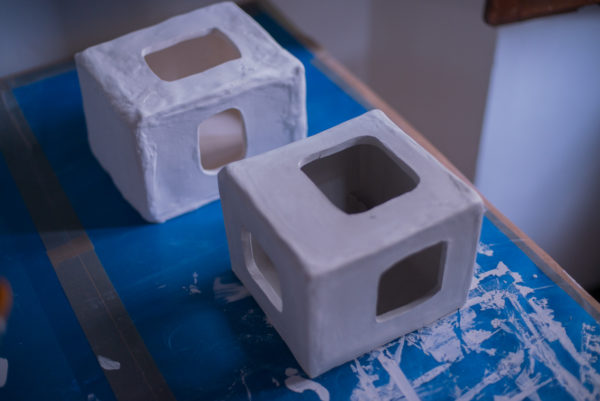 Ideal X* is a set of ceramic corner castings. The functional and ‘real’ corner castings are made from a complex metal alloy designed to withstand extremely high pressure and varying temperatures. Eight corner castings – one for each of the vertices – form the most fundamental unit of our containerized global economy, holding goods and belongings in place as they are transported and (dis)placed across the oceans. Materially, ceramic is antithetical to the metal alloy in its ability to resist methods of exacting measurement, replication and resilience. And in being fragile ceramic fundamentally embodies the possibility of failure.

The objects, methods, movements, and functions which have been designed to perform and reproduce efficiency, by their very quotidian, mundane, and disposable nature actually constitute the most visible form of precarity. They are manufactured by, handled by, stacked by, moved by unnamed, uninsured, and unquestioned labour. That which makes these objects eminently disposable also renders those who are governed by them eminently replaceable. Such animation of precarity is central to understanding the infrastructure of assurance the world is being built on. Lauren Berlant says, “…infrastructure requires patterns, habits, and norms of use, in contrast to institutions, which are defined by their concentration and distribution of resources and legitimacy.”

Infrastructure implies a grid, a system, a series, and offers predictability, clone-ability, imitation, and in some measure masculinity. Precarity, on the other hand, carries with it the burden of affective, emotional, hysterical fear, and in many ways threatens the stoic masculine form. It can be too simple to describe or too complex to illustrate.

To what extent can one externalise, illustrate, explain, and underscore anxiety before it turns on to itself and colonises the idea of failure? To begin with, acceptance of failure denotes the acceptance of the particular binary: that there exists success and its opposition failure. The equation is: subject performance equals to effort or volition divided by conditions. That is to say, the result of this division, that which is understood as performance, is what gets labeled as success or failure.

The anxiety of loss, transition, and dislocation influences the narrative shape memory can take. The same anxiety can anchor the affective responses to specific images, objects and other materiality which carry the evidence of the loss, transition, and dislocation. The same anxiety highlights the singular and individual in opposition to the collective and collaborative. This deep swell of emotional and psychic force brought to fore by the notion of failure can’t simply be screened through as acceptance or rejection. There is, as Anne Carson says, “no life of the mind available amid beating and thrashing and scorn and damage and fear, no space at the back of oneself to go to and think anything else.” 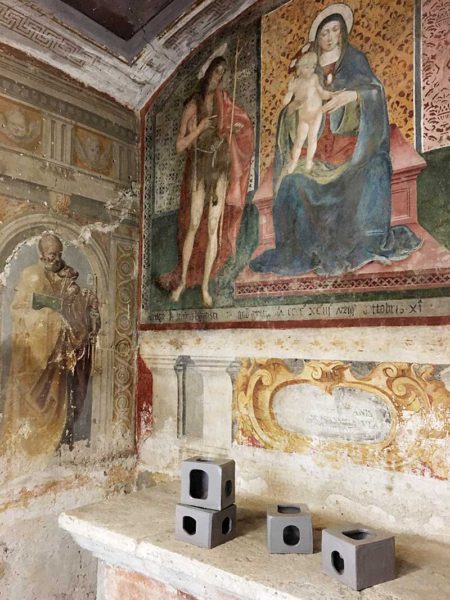 Neeraja D creates installations that visually address repetition, silence, and failure. Her work is situated within the interstices of privilege and caste-identity with a particular focus on isolation and displacement. Born and raised in Hyderabad, India, Neeraja D holds an MFA from Cornell University’s Department of Art, Architecture and Planning, where she received the Charles Baskerville Painting Award for 2015. She is currently a member of the faculty at the Srishti Institute of Art, Design and Technology, India. Her work has been exhibited in solo and group shows in New York and San Francisco. She is also one half of the collaborative identity N/A, which is sustained through correspondence between Bangalore and Chicago. www.dneeraja.com

The Open Call residency opportunity is for an artist or curator of Indian citizenship, aged 35 or under. Applications are not currently being accepted. Neeraja was chosen for the Inlaks Foundation award from nearly 100 applicants.

The Inlaks Shivdasani Foundation was established by Indoo Shivdasani in 1976 as a permanent platform for his philanthropic activities. The Foundation focuses on providing scholarships, grants and awards in any field to outstanding young Indians to develop their professional, scientific, artistic and cultural abilities.

It prides itself on being open to a wide range of subjects, many of which are not covered by other fund-giving bodies. Over the last three decades, more than 400 scholars have benefited from overseas scholarships while another 150 have received awards and Take-Off Grants in India. The list of Inlaks alumni reflects the diversity of scholars that the Foundation has supported.

In response to a vibrant and flourishing art scene globally and within India, the Foundation has increased its support to young practitioners in the field of Fine Arts. Significant painters and sculptors supported by the Foundation include Jagannath Panda, Rekha Rodwittiya, N.N.Rimzon, Gigi Scaria, Vasudevan Akkitam, Manisha Parekh, Sonia Khurana, Sheela Gowda, Shaina Anand, Sakshi Gupta, Hemali Bhuta and Chinmoy Pramanick all of whom have contributed considerably to the fabric of Indian art. While some of these artists have been recipients of the Inlaks scholarships to universities abroad for graduate degrees in the Fine Arts, others have been recipients of the Inlaks Fine Arts Awards that aid them to commence their artistic projects within India.

The Foundation has collaborated with the Royal College of Art for several years and supports artists at residencies at Gasworks – London, Darling Foundry- Montreal, Cittadellarte-Fondazione Pistoletto Biella – Italy, Rijksakademie â€“ Amsterdam, Skowhegan, Maine â€“ USA, and Delfina Foundation â€“ London. Â  Within India, artists are supported at KHOJ in New Delhi, BAR-1 in Bangalore, Sandarbh in Partapur, Rajasthan, What About Art, Mumbai, Studio 118, and Cona in Mumbai, Heritage Hotel in Goa, andÂ  Taj-Ske residencies, Bangalore, The Foundation has also supported a curatorial lab,Â  in the School of Art and Aesthetics, at the prestigious Jawaharlal Nehru University, New Delhi.Â  Among the more recent supports in the Arts field the Foundation has made are thatÂ  a curator is supported at the MRes programme at Goldsmiths University in London and a young museum professional gets to attend the International Training Programme at the British Museum in London.