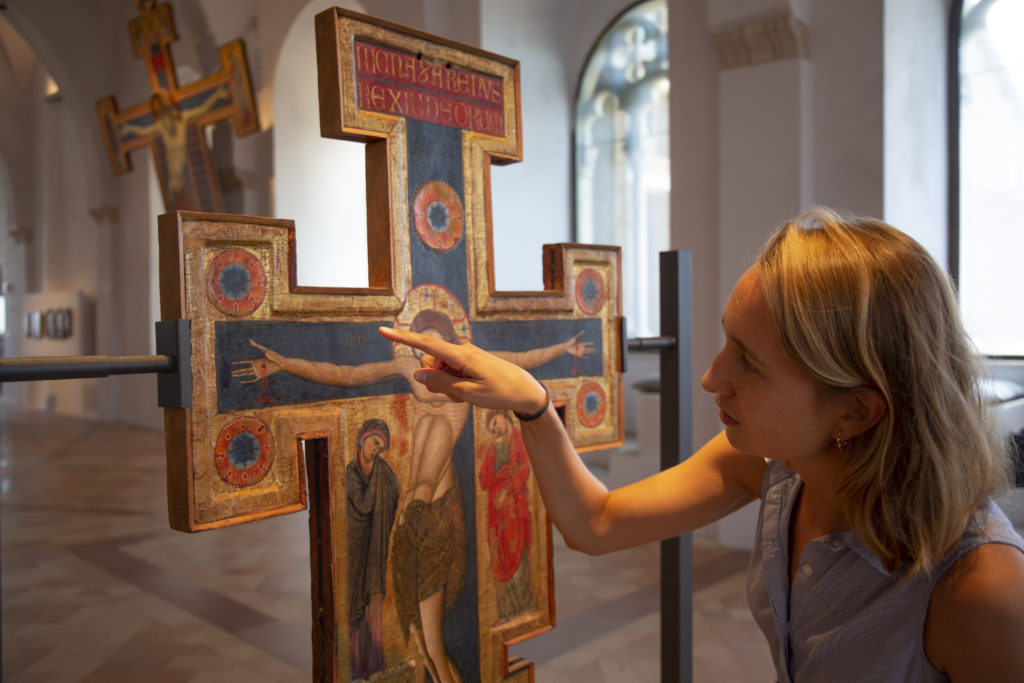 Stephanie Wisowaty is a PhD candidate in History of Art at Yale University. Her dissertation, supervised by Prof. Jacqueline Jung and Dr. Laurence Kanter, examines the materiality, mobility and mediatory powers of double-sided painted processional crosses in late medieval central Italy. The project investigates how such objects invited a multisensorial and imaginative devotional process, and how they participated in and contributed to the artistic innovations and identity-building practices of burgeoning religious communities in late medieval central Italy.

Three of the crosses at the centre of Stephanie’s research – by Maestro di Sant’Alò, Maestro di Cesi and Maestro della Croce di Trevi – are held in the collection of the Museo Nazionale del Ducato di Spoleto. Assisted by the museum Director, Paola Mercurelli Salari, Stephanie was able to study these crosses in person for the first time. She also made visits to the Galleria Nazionale dell’Umbria in Perugia, which holds two important examples, and she studied crosses in the reliquaries of Basilica di Santa Chiara in Assisi and at the Santuario di Santa Chiara della Croce in Montefalco.

Prior to her doctoral work Stephanie received a BA in French and German Literature from Yale University (2016) followed by an MA in History of Art from the Courtauld Institute of Art supervised by Prof. Joanna Cannon (2017). In 2016 she curated an exhibition at the Yale University Art Gallery entitled ‘Le Goût du Prince: Art and Prestige in Sixteenth Century France.’ She has also held curatorial internships at the Bargello (Florence) and the Museum der Angewandten Kunst (Vienna). As of March 2022 Stephanie is a Predoctoral Fellow at the Bibliotheca Hertziana in Dr. Tanja Michalsky’s department ‘Cities and Spaces in Premodernity.’