THE BASSLINE OF EXISTENCE 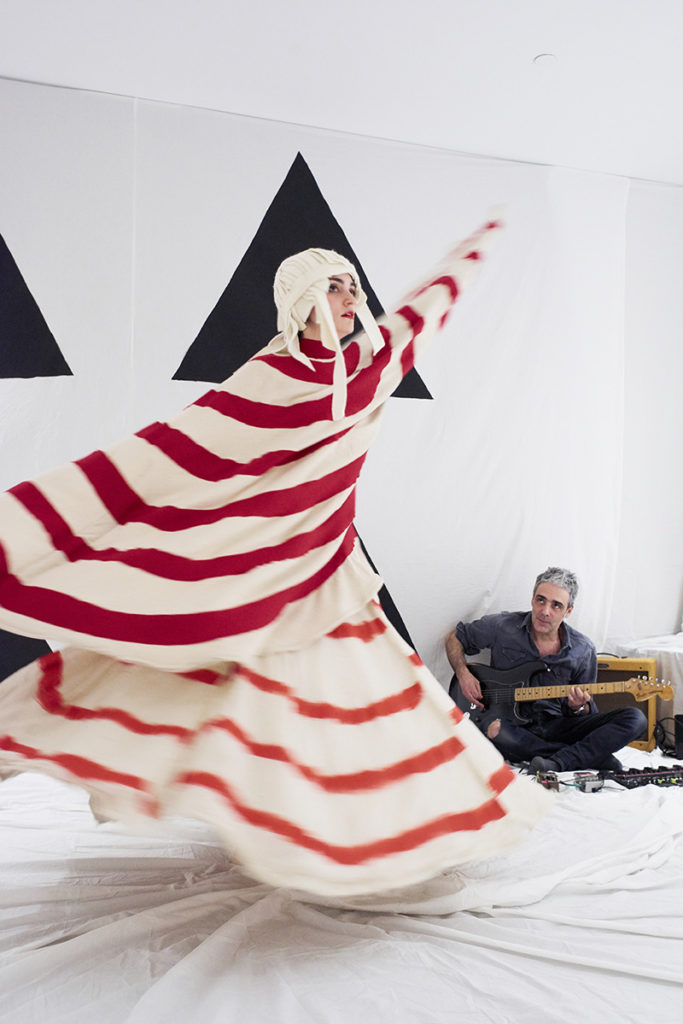 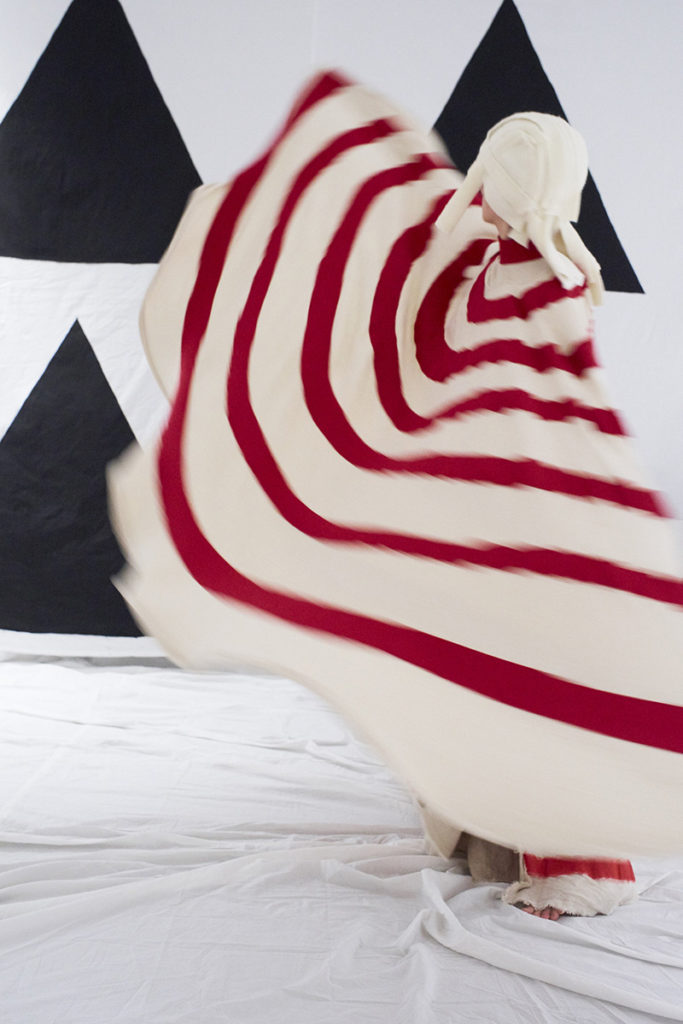 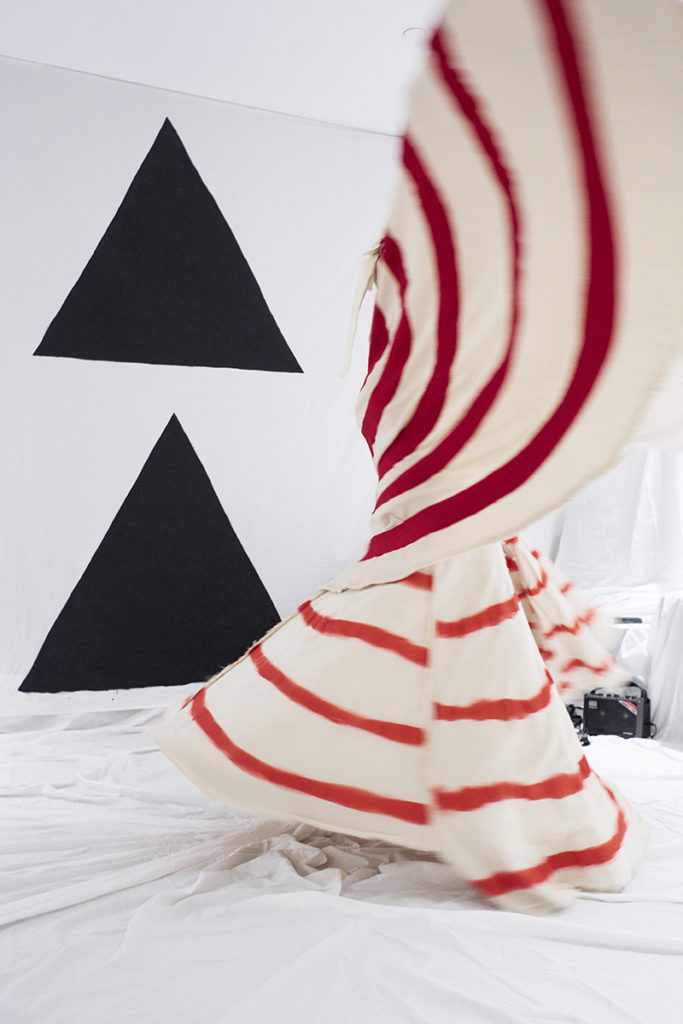 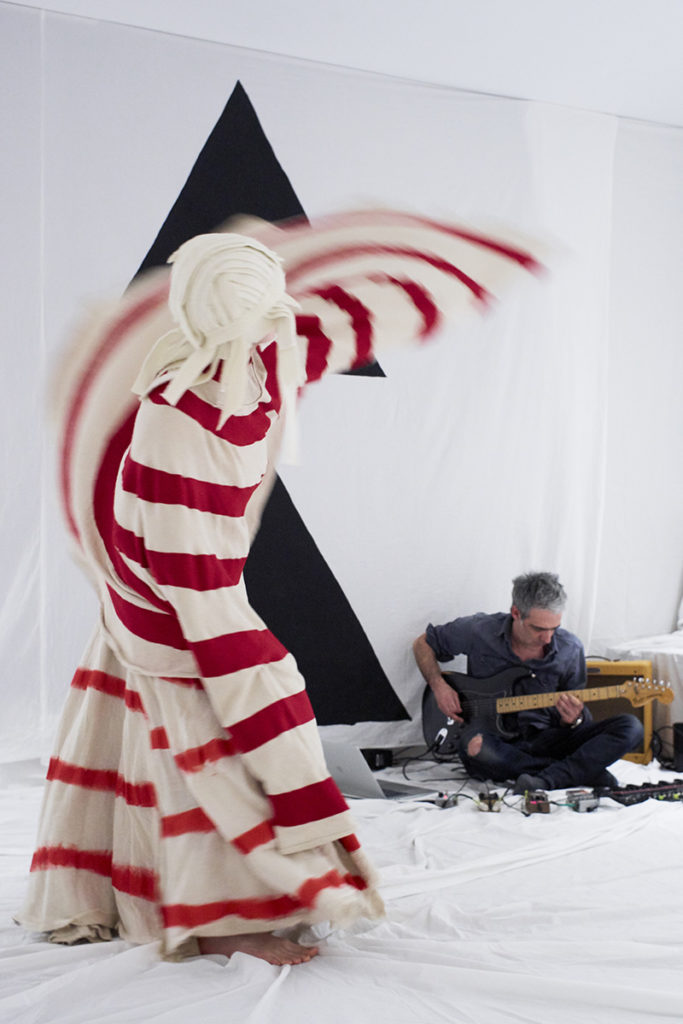 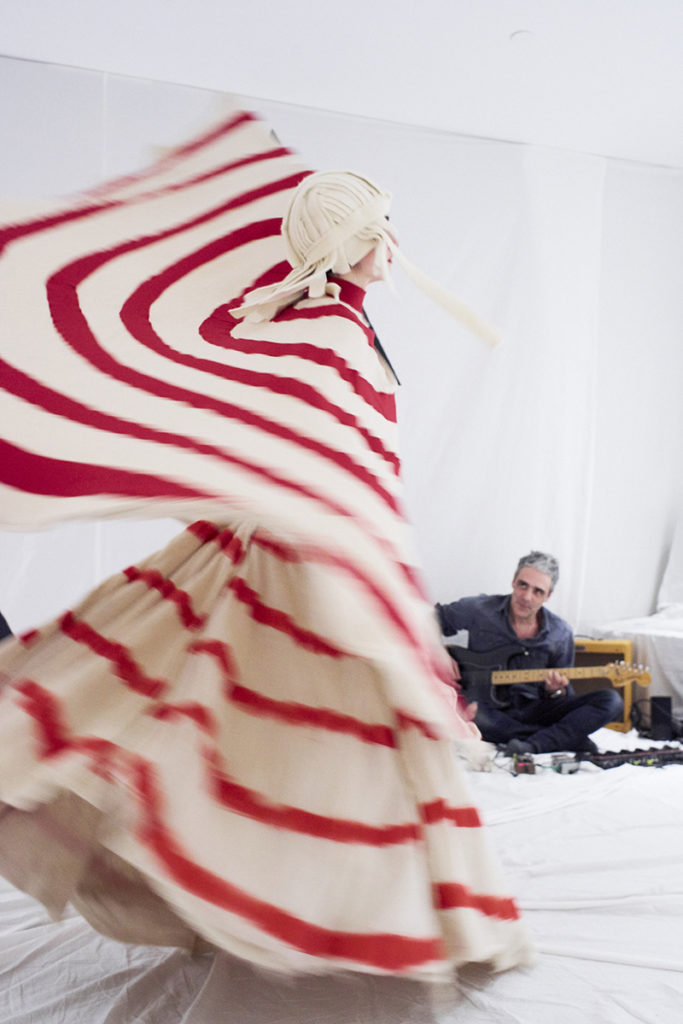 Visual artist Adelaide Cioni joined us in Spoleto to continue her Ab ovo series (2020–ongoing), which explores patterns and decoration, shared by different cultures, that recur through the centuries. To date, her research has taken form as large stitched canvases, etchings on diaposlides, drawings, modular structures and costumes. In Spoleto she began working on a related performance with her co-resident, composer in residence Dom Bouffard and dance artist Typhaine Delaup. A first iteration of this performance, hosted by Fondazione Memmo in London, is illustrated here and accompanied by a conversation between Adelaide and Mahler & LeWitt Studios curator Guy Robertson.

Guy Robertson: Could you describe the Ab ovo series, which provided a starting point for your explorations in Spoleto?

Adelaide Cioni: The focus of Ab ovo is the recurrence of abstract patterns in various artifacts and natural elements, both throughout centuries and geographical areas, from prehistory to the Renaissance, from non-western visual imagery to present-day systems. These patterns – such as stripes, triangles, grids, but also stylized stars and leaves – are non-verbal elements which have been shared by humans throughout centuries and regions. They testify to a connection between humans and objects in a non-linear way, and hint at the possibility of a common visual heritage shared by all of humanity. Ab ovo is a song of the margins, an attempt to bring into the foreground the secondary images that slip from our attention. These images have no voice and no story, yet they are deeply rooted in our memory. Ab ovo is also an ode to diversity, a defense of the deviance of bodies. The research lends itself to many different approaches, it is a lens through which we can look at our way of using language and narration, at our relationship with nature and objects, at the way we experience time, and difference, and marginality, and our sense of community.

GR: Why is pattern and decoration so pertinent?

AC: Because they are one of the very first expressions of visual art. Decoration was something we did in prehistoric times, it responds to an impulse of leaving one’s mark, filling a given space with one’s own visual imprint. A pattern is very much like a song, and I am convinced decoration was strongly connected to music, to the idea of rhythm – which is the basis for music and much else. It is also interesting because it is a possible bridge between an everyday object and a work of art, something I’m very keen in investigating. There are some patterns which are engrained in our visual imagery, like grids, stripes, repeated circles
or lines, triangles, spirals, they are cross-cultural and all over the world. When I look at a painting and see the image of a checkered tablecloth I feel something finds peace inside me.

GR: Did you find particular points of reference in and around Spoleto?

AC: Yes, my works are often translation acts relating to an “original”, something I see in real life. They are generated by an exercise of devotion to the real world, bodies, objects, plants, whatever is out there. For example, a drawing on a pitcher in the archeological museum provided the pattern for Prussian Blue for Spoleto, I “opened” it out and transferred it onto a two dimensional plane.

GR: You spent time discussing your work with our two composers in residence Dom Bouffard and Duval Timothy. Drawing is central to your practice and I’ve heard you describe it as a “vibration”. Could you expand on this?

AC:I am convinced that our eyesight functions on a sheer physical level. I mean if you think of colour, when you see a large expanse of some colour, a field of green grass, or the sea, it’s a vibration that you get (it’s easier to focus on the physical perception with an expanse of colour, as it is mostly meaningless, not distracting on a narrative level).

GR: You experimented with Dom by making drawings, live, in response to his improvised compositions on guitar.

AC: Yes, we decided to try when he showed me his scores, which were drawings with some elements of the patterns I was also working with. It was great to experiment together, I didn’t expect anything but his sounds found immediate translation in colour and drawing signs for me. There were some funny moments when he realized through my drawings how a specific sound he would make was round to me, or pink. We have kept doing it, and also did a performance with an audience in London at Worlding Project.

GR: How does pattern making – a kind of echo or reverb, perhaps – relate to the your notion of drawing as “vibration”?

AC: Pattern is the visualisation of a rhythm in space. This rhythm takes on different shapes and colours to express the different vibrations of whoever is creating it. And it is repetitive and constant, because that is the basis of life, it is the very thing that allows it. The heart, our internal organs are repetitive and constant. They are the bassline of our existence. And patterns are a portrayal of the bassline of our existence. You can play on top of them, you can even hide them, but they’re there. Making or drawing a pattern is like singing a song. Projecting out your own rhythm, your own vibration. To see it double itself, to have confirmation of your being real. That’s how I see it, at least.

GR: Your latest collaboration, stemming from the Spoleto residency, is a performance with Dom Bouffard and dance artist Typhaine Delaup. Can you say a few words about this project and what it contributes to the Ab ovo series?

AC: As I’ve said, during the residency at Mahler & Lewitt studios Dom and I started to investigate tangencies between drawing and music. At that time I was also starting to experiment with costumes and mobile modules in space. Dance artist Typhaine Delaup was helping me with this, looking for ways to have movement enter the work. So things naturally evolved with a work that encompassed drawing, music and dance. The research sessions we did continued whenI spent time n London at Worlding and then Gasworks at the beginning of 2022. I was invited by Gasworks to conceive a performance to present at Fabiana Bond’s house, so I asked Dom and Typhaine to take part in it, and to create a conversation around a specific pattern (concentric circles). The title of the piece was Prayers to Jupiter, and it was a very intense experience, I created a set for the performance, transforming the room in Fabiana’s house. What we presented was the first stage of a work in progress which will go on to a second phase to be shown during a solo exhibit at Mimosa House in March–April 2023. I feel this further development of Ab ovo is a natural continuation of the research that has so much to do with our way of being in space, where each of us sets forth their own rhythm and vibration. It was amazing for me to see how drawing could move in space, and how that same drawing could be translated into sound.