Purchasers of the edition can choose to be recognised as a ‘Friend’ of the Mahler & LeWitt Studios. As well as the edition, ‘Friends’ receive an acknowledgement on our website and invitations to our special events. All proceeds from the Artist Edition go towards supporting our programme of residencies and projects in Spoleto. Thankyou for your support.

Framing (as pictured) can be arranged in consultation with the Mahler & LeWitt Studios. Please leave a note in the message box at the bottom of the form when you click to Buy. 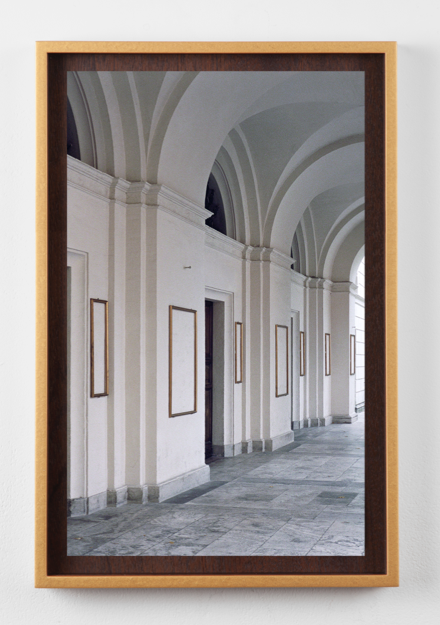 The launch of our first Artist Edition offers an appropriate opportunity to give our supporters an insight into the daily work and opportunities of a residency session at the Mahler & LeWitt Studios.

Tom Lovelace came to Spoleto as an Anna Mahler Association award winner in 2012. During his five week residency he developed work which would later form the basis of his solo exhibition ‘This Way Up’ at Flowers Gallery, 2015, and a publication of the same name.

Lovelace’s interest in the incidental image and the re-invention of everyday materials led him to search the town and its nearby valleys for source material. Outside the Teatro Nuovo Gian Carlo Menotti he happened across a series of red felt announcement boards, framed in gold. On close inspection the boards showed a complex arrangement of red-brown rectangular blocks within blocks where posters had been placed and the surrounding felt discoloured by the light of the sun. For Lovelace these felt windows and their minimalist patterns embodied the fundamentals of photography – the use of light to trace and capture time and movement.

We promptly made contact with the Director of the Teatro Nuovo who agreed to let Lovelace remove the panels as long as they were replaced with replicas. He shipped the light affected panels to his studio in London. He cut the panels up and re-joined them, reiterating the formal qualities that had first caught his attenton. The works were then framed under UV protected glass, preventing any further degradation of the felt by light. The final works Untitled Red #1, #2, #3, sit in their frames brooding, like a set of pre-fabricated Rothko’s.

After the panels had been extracted the frames at the Teatro Nuovo were left empty for several days before the replicas were installed. Lovelace returned to document the site, a scene he described to me as both uplifting and haunting. The empty frames in their fluted architectural setting seem to offer both the potentiality of a blank canvas as well as a philosophic confrontation with the void.

Lovelace recommends framing Rosso Teatro Intervention in gold. Ostensibly the picture depicts a site of extraction – a set of empty gold frames – and yet by inserting it into its own gold frame the initial gesture of extraction, the intervention referred to in the title, is neutralised. The absence becomes a presence, the gold frame uncannily materialised, abutting our physical experience. It argues that we are always perceiving, even when we are apparently being shown nothing.

I find great satisfaction in Lovelace’s work because he so often presents these double binds – moments of visual paralysis which suggest the limitations of perception whilst insisting that we keep on looking. Much of Lovelace’s work is made using pre-existing objects which he teaches us to look at differently – to re-frame them and let meaning seep slowly out.