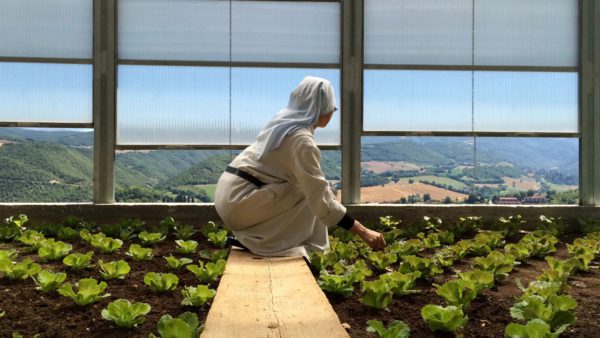 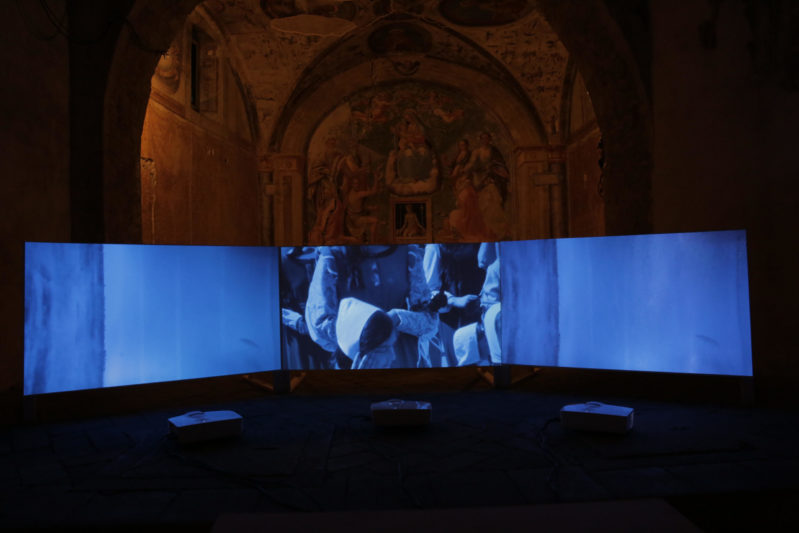 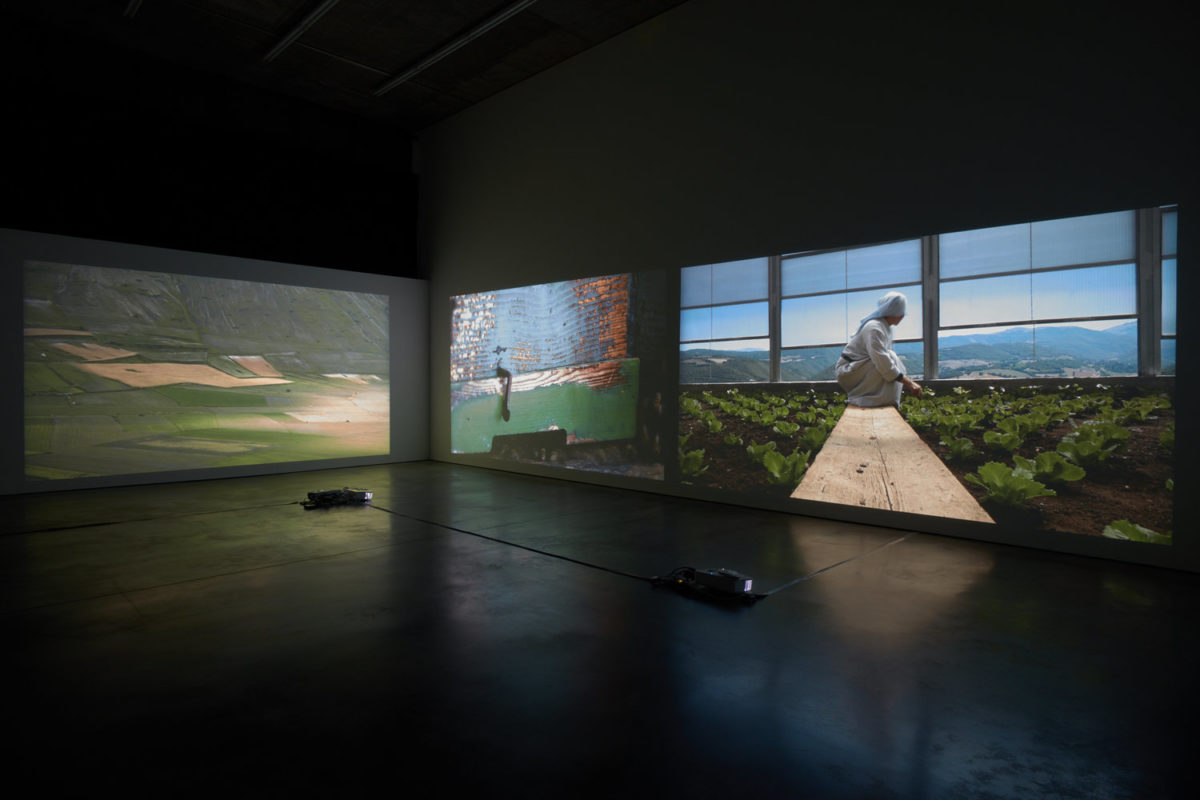 Julie Born Schwartz joined us on a residency in 2016 knowing that she wanted to make a film which explored the nature of visions and spirituality. She returned on a second residency in 2017 and in 2018 the resulting film Ex-Voto was premiered at the Festival di Spoleto, before it travelled to other venues internationally.

Initially, Julie had researched the histories of female saints in the Umbrian region and became fascinated by the story of Santa Rita (1381-1457), who was from nearby Cascia. Santa Rita is the patron saint of ‘impossible causes’. After repeated visits to the Santuario di Santa Rita da Cascia, Julie gradually became acquainted with the nuns who live there today. In its history, Julie was the first person to be allowed to film in the cloisters. She documented the day-to-day rituals and activities of the nuns.

In the convent Julie was shown a votive made by Yves Klein, which he had offered to Santa Rita shortly before he died. It had lain forgotten until many years later, when it was rediscovered after an earthquake in 1979. As she explains in the interview which follows, Klein’s connection to the convent develops a second strand to Julie’s research.

For more information about the film Ex-voto please visit the following page: Ex Voto at the Festival di Spoleto 2018.

The interview below was prepared by Jonathan Stubbs for the Royal Academy newspaper The Studio, N° 16 Summer 2017, and is reproduced here by kind permission. 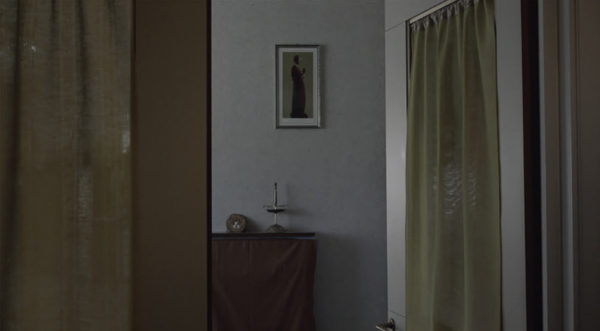 Jonathan Stubbs: What was your initial proposal for the residency?

JBS: I wanted to investigate visions and invisible matter in relationship to faith. Researching some of the histories of female saints in Umbria like Margaret of Citta di Castello, Clare of Montefalco and Angela of Foligno. Connecting it with the stories of the German composer and Christian mystic Hildegard of Bingen.

And then I was hoping to be allowed inside nunneries, to make some field-recordings with local nuns.  A turning point was my visit to Cascia where I saw the ex-voto which Yves Klein donated to Santa Rita, a Saint for ‘The Impossible Causes’.

After this experience I went to Roccaporena to explore the birth town of Rita, who had taken centre stage in the research. From here I contacted the monastery in Cascia with the hope of gaining permission to film with the nuns.

JS: There are artists, curators and writers on residency there. Were there other artists there at the same time as you and did you develop a particular dialogue with any of them?

JBS: I had many inspiring conversations with the other people at the residency. Especially with another video-artist, Matthew Burdis, who shared my interest in film making. But everyone there became very good friends, that I’ve seen and kept in contact with after returning from the residency.

JS: Many of your films concentrate on themes of spirituality. Was there a particular angle that you developed on this residency?

JBS: The nature I saw in Spoleto and the surrounding region of Umbria influenced my process of making this film. In particular, repeatedly taking the trek up the mountain overlooking Spoleto called Monteluco (the name derives from the Latin word “lucus”, meaning “a sacred wood dedicated to Jupiter”).

On the top of the mountain there is standing a copy of the stone with the “Lex Spoletina”, an act enabled in the 3rd century BC to forbid chopping down the trees from the mountain; protecting the woods and making it one of the oldest regulations within environmental matters.

This oak-wooded mountain has traces of Christian settlers dating back to the 5th century. The religious hermits used the natural caves and grottoes on the side of the mountain to meditate and pray. It is a very special sensation and experience to walk in this wild vegetation.

JS: You mentioned that you looked particularly into the life of Saint Rita. Can you tell us a bit about her?

JBS: Saint Rita, maiden name Margherita Lotti (1381 – 1457), is the Saint of ‘The Impossible Causes’ because of the difficulties she herself met in life.

According to the stories that have been told, she was born in Roccaporena, and expressed early that she wanted to be a nun. However her parents arranged a marriage when she was 12, from which she bore two sons, but lived with violent abuse from her husband. He was murdered due to a vendetta and soon after both her boys died of deadly illness. After this she became an Augustinian nun.

Other stories describe how she got a visible mark (stigmata) in her forehead while meditating before an image of Christ crucified.

While chronically ill, she asked for a rose from her old home as her last request, in January. When her cousin went to the house, she found a single rose blooming in the garden. She died on May 22, when she was in her seventies and was later canonised in 1900.

JS: So in the end you did manage to visit a nunnery, and it turned out they are custodians of a Yves Klein ‘ex-voto’.  What is this object and how did you discover they owned it?

JBS: It is a transparent plastic casket 22×15cm with compartments containing ultramarine pigment (the International Klein Blue or IKB) pink pigment (mono pink) and gold-foil (mono-gold). In the bottom part three gold ingots of different weights is contained resting on blue pigment. The gold ingots derive from the sale of Klein’s piece Zone of Immaterial Pictorial Sensibility, that took place at the river in Paris, which started in 1959.

Inside the casket there is a handwritten letter by Klein. In the text he first thanks her for his previous favours, then Klein places himself under the protection of the Saint, and ask for her aid to assure the success and survival of his work. He donated the ex-voto anonymously on a trip in 1961 two years before he died.

I learnt about the piece from Guy Robertson who is the curator and co-director of the residency, and we went together on the first trip to the monastery in Casia.

JS: What was Yves Klein’s relationship to the nunnery?

JBS: His aunt Rose Raymond Gasperini was a religious devotee of Saint Rita, and had told Klein about her in his childhood. Klein had made several pilgrimages to the nunnery, and donated anonymously the plexiglas box.

JBS: I was fascinated by Klein’s act of of doing something that is immaterial when praying, and then transferring this into something material when it became the votive. I’m interested in this ritual and the symbolism that the object carries.

Also, I was mesmerised by the tactility and colours I saw in the object, especially the IKB blue, and Klein’s belief that a colour could refer to the infinity and the void.

Using the media of film for this project, I wanted to explore this alchemic process of a movement from a representational mode towards the abstract.

I saw the object after witnessing a ritual in the church with a nun behind bars, passing out a stick that had belonged to Rita; the pilgrims gathered in crowds and each wanted to touch the stick.

Half an hour later Guy and I stood in front of Klein’s object behind similar bars. We both felt a strong desire to touch the object, just in the same way the pilgrims wanted to touch Rita’s stick. I find this similarity between the art object and the religious object very interesting.

JS: How do the present day custodians treat the object?

JBS: It used to be kept in the offerings depository. In an earthquake in 1979 the nuns were in need of gold-leafs for some restoration of the church and a nun collected the Klein’s votive offering and gave it to a painter called Armando Marocco who was working on the restoration. He recognised the colours from Yves Klein’s other pieces and contacted a dealer in Milan, who then went to Cascia in 1980 to authenticate the ex-voto.

It is now kept in a closed secured area but is considered entirely equal to the other offerings from pilgrims.

JS: You are going to make a film about this experience — were they happy with you filming in such a sacred space?

JBS: I was granted the most incredible privilege; permission to film within the cloistered areas of the convent, for the first time in its history. And I am so grateful for that. We had some good talks about the film, and that it would not be a classic documentary about Saint Rita, but an art film mixed with other material, filmed in other locations, abstractly exploring rituals, devotion and visions.

During my recording days there, I met a very warm hospitality and openness, and was allowed to observe and interact with them during all their activities. A particularly special moment was filming their early morning prayers; that was a very intimate moment to witness.

JS: When will the film be finished and where can we see it?

JBS: The film will be finish in 2018 where I will show it during Festival dei Due Mondi in Spoleto. I hope to show it to other audiences too, possibly here in London.

Julie Born Schwartz lives and works in Copenhagen. She studied at Goldsmiths and the Royal Academy Schools in London. In 2018 she will premiere her new film Ex-Voto, begun during her residency with the Mahler & LeWitt Studios, at the Festival di Spoleto. She also has a solo exhibition at Galleri Image in Århus, Denmark. She has exhibited and had screenings across Europe; for a full list and information about her films please visit her website. She is represented by Union Pacific. www.juliebornschwartz.com